A Great Place To Live!
The Town and Village of Allegany, in Cattaraugus County, NY, are situated along the Allegheny River among the Enchanted Mountains of Western New York.

This setting is enhanced by the presence of St. Bonaventure University, a Franciscan Institution which is a first class post-secondary educational opportunity which boasts a beautiful walking trail, a public 9 hole golf course with clubhouse for dining, as well as Allegany-Limestone Public School which has one of the best ratings in the area. The Village with its newly renovated downtown area has a variety of restaurants and bars as well as stores for your shopping and local merchandise. Within the Town are several parks for play and picnicking.

The Allegheny River Valley Trail, which starts near St. Bonaventure University is an ideal place for a walking, roller blading or biking.  Next to Allegany, NY is the City of Olean which offers many of the amenities of a larger, metropolitan area. In addition, within 20 miles are Allegany State Park, the Seneca Allegany Resort & Casino in Salamanca, and the Ski & Golf Areas of Holiday Valley Resort in Ellicottville.

The Town’s Government is made up of a Supervisor and 4 Board Members. The Town provides services such as the Recreation and Parks Department, the Senior Citizen’s Center, Dog Control, the Assessor’s Department to all areas of the town, including the village. Other services such as the Highway Department, Town Courts, Planning, Code Enforcement and water & sewer are provided only for people outside the Village. Taxes to support these Town services are assessed to all residents of the Town, but those residents within the Village pay a different rate than those outside the village.

The Village’s Government is made up of a Mayor and 4 Board of Trustees. The Village supports it’s own police force, streets department, planning and zoning ordinance, water & sewer department and garbage pick up. Taxes to support these services are paid only by residents and businesses of the Village.

There is an independent fire district that services residents of both the Town and Village.

The Allegany Town Hall was recently remodeled to update and layout the offices to make the building handicap accessible.  The Town Hall was originally built in 1907.  There is a new entrance ramp and handicap accessible restrooms - all first-floor offices  were updated to accommodate current needs.  The Community Development Block Grant helped with much of the cost.  Kinley Corp was the contractor; CPL was the architectural firm; and former Supervisor Jim Hitchcock, current board member Kathy Martin, former board member Bob Parker and Comptroller Diana Piccoli were all critical in the project.  Supervisor Mike Higgins sends many thanks to Jim Hitchcock, Diana Piccoli, Kathy Martin, and Bob Parker for their efforts in making this a much needed project a success. 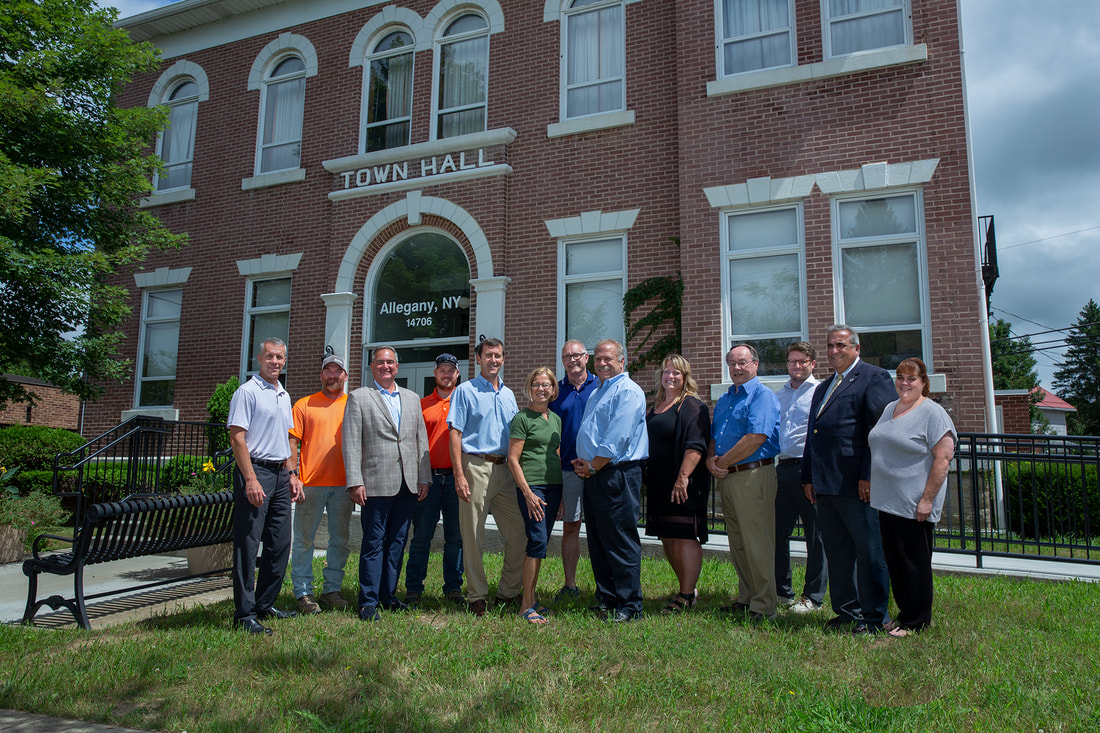